Being as I like to amass such stuff, I picked up a rather arty-farty sales brochure for the Raptor 1K the other day. Very reasonable price for such a rare item too, as no other ebayers were interested!

Apart from weird images of a naked bald gymnast of indeterminate gender, what interests me are the pics of the bike in two colour-ways (I think that's the term?). Otherwise identical to the bikes we now have, the red version had a red seat which I've not seen, and both had very in-your-face 'Raptor' logos on their flanks; nothing like as subtle as the ones to be seen on bikes these days. I just wonder if it was a matter of taste or whether there was possible conflict between Cagiva's best and a Yamaha quad-bike of the same name? 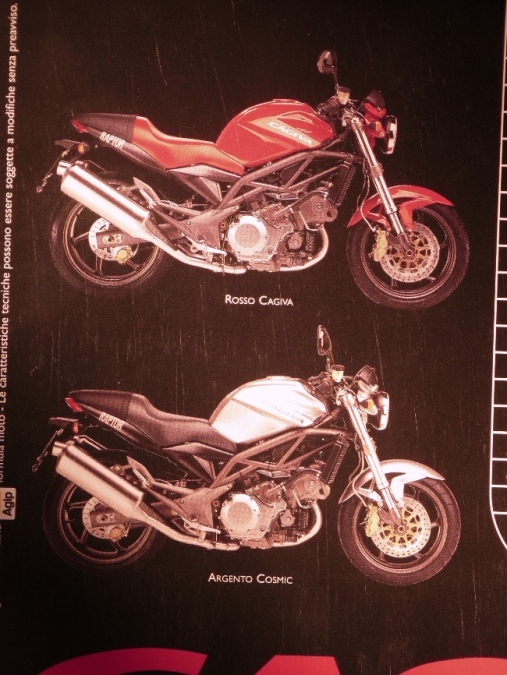 . I have a pile of stuff that came with my raptor originally from previous owner.... as mine is due to go to a new home i will have a sort through before it goes and pass to you if you are interested x. There might not be anything there but i will have a look

had a red seat which I've not seen, and both had very in-your-face 'Raptor' logos

My V-Raptor is red and is original seat was also red/black as per the photo and looked quite nice, a little 'tarts boudoir' may be, but hey-ho what we'll do for a little glamour. Unfortunately, as is the case with such upholstery, it blacked up with use and soon lost it's appeal.

I've never seen the large logos either and I must say they don't look good at all.
Top
Post Reply
4 posts • Page 1 of 1