First Ride for me

First Ride for me 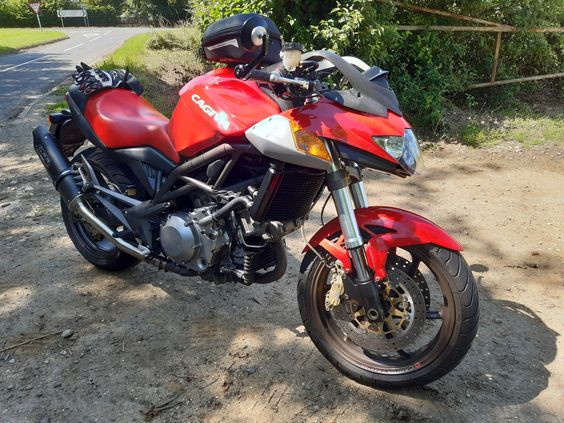 Ok so first ride out, bike sounds lovely with the cans and steers really nice and attracts attention.

The Suzuki lump has plenty of go, but its a long old pull on the throttle, maybe a quicker action would be nice. There are no hiccups and i rode it in the 3k to 4k range to see if it would miss behave and doesn't so all good.

First it has no brakes, so i took of the calipers, pushed them out a bit and cleaned them. One caliper only had one piston initially working and the other only had two, all eight now come into play so i am expecting some brakes when i ride it next.

It has Brembo pads, 07.6708.40 in it, whether they are the originals, its only done 4k miles and maybe i should replace them (any ideas?) in the meantime i shall ride it and see if i have brakes!

Yes the front forks have too much compression damping which make them a bit skittish, but i have read about many changes and will start with the cheapest option first and work up from there.

Its a bit low, i didn't suffer from the knee angle, but ground clearance, feet kept dragging. I have ordered a jack up kit that claims to raise the seat by 30mm. I might get some lowered footrests but will wait and see.

Rear shock is basic, so i can see a Hagon going on, unless someone suggests something else such as the Falco option, but i will ride it first after the jack up kit arrives at the end of the month.

Finally i have ordered new handlebars. This and the GPR slipons were the only change from stock the bars are flat, i don't mind the riding position but it means the switches will hit the tank, so i have gone for a low rise black bar. I have also changed the mirrors, stolen them off my other road bike for now!

It certainly has character and i love the looks, so it seems my other road bike will go, i will just keep the track day bike. Why would i want to ride anything else!
Roadsters are me!
Top

Good to hear that it's all go!

Re your points: I'm afraid I've never liked any of Brembo's pads and alway default to GoldFren HH as giving a good but not vicious bite.

As regards the shock, be warned that the obvious option for jack-up of the suspension will not fit those models that have a damping control at the base. Lust Racing I think it is, and they specifically exclude the X-Raptor which has adjustment, so you should check the options with them if they are your source. All is not lost because it isn't difficult to make your own links to accommodate an adjustable shock. As it happens, I have a spare Falco shock and a mint one from a V4 Tuono. After trying the Falco one, I decided my problem was more to do with the spring-rate, so added a custom adjustable shock to my order for Matris fork cartridges. It would be good to move my spare shocks on!

Can't see any shock adjustment on my V-Raptor, but i bought the Jack-up bits from Germany, not the Lust Racing ones.

What was your Falco shock spring rate problem, too hard or too soft? does the one from a v4 Tuono fit?

I can see falco shocks from £50 and an adjuster at the bottom, do they make a lot of difference? Do the jack up kits cover the adjuster? I had the same problem with the Moto Guzzi Griso i had, but once adjusted never changed it again so no problem.

I bet the Matris stuff isn't cheap! i expect the more cost effective solution would be a fork change, but that is a little further down the line.

Any other modifications greatly accepted

Almost all bikes have springs too hard for my light weight and sensitive backside! Sometimes I regret being a princess (or rather a lightweight prince

), because I've lost track on the number of suspensions and seats I've modified. If the roads in East Anglia were smoother, it would save me a small fortune.

I made the point about the aftermarket links because you said you were considering adding an adjustable shock, not because I thought your V-Raptor had one already.

I fitted the Falco/Tuono-twin shock and it didn't really help. The problem with the Lust Racing links wasn't one of access to the adjuster but actual clearance for the damping adjustment mechanism itself. You may be luckier with your units, but I had to fabricate links myself. I didn't actually try the Tuono-v4 shock: dunno why I bought it really! It came straight off a new bike that was being upgraded and it looks beautiful. I must check to see if the layout of it resembles the Falco one closely. With aftermarket shocks, the alloy top eye is often too bulky to fit the Raptor mounting point, so needs reducing. OEM type often have slimmer steel top eyes.

I seem to spend my life making suspension better, i guess mainly because i know it can. Took me ages to get my last Moto Guzzi to work. The current Triumph is ok, but the shock is too hard and the front end too light, maybe i am being piccie!

Thanks for you explanation on the the linkage, i will keep that in mind. Is the problem the same for the original rocking lever as they call the triangular piece?

I can't be certain now if the OEM triangular link plates allowed fitment of an adjustable-damping shock, but I think probably so. Someone else may be able to advise on that. Certainly, the Lust Racing ones didn't make room for them.

Its a bit low,

You might find this is a little better with a new shock. When I replaced mine, for a Wilbers, just knocking it off the abba stand I could see & feel the difference with no immediate sag.

Btw the Wilbers has rebound adjustment which is just about accessible over the top of the standard triangles.


I bet the Matris stuff isn't cheap! i expect the more cost effective solution would be a fork change, but that is a little further down the line.

I looked into a fork change and what with having to fart about with possible different discs/calipers/axle/wheels/mudguards in addition to a refurb of the forks themselves it didn't seem that much cheaper than the Matris kit. Additionally, for me at least as it's a daily driver, I could make the change in a single weekend. Bish, bash, bosh... done.

Where dd you get yours from?

Well... it was none of them... I've got the receipt in my hand and the stock code was F12C102S. But this looks to be an old code superseded by F20C102K i.e. a F20K fully adjustable with compression on one leg & rebound on the other.

It's strange nothing is listed on Matris's web site but do a web search on the code and one of the results is: https://www.carpimoto.com/en-GB/Bike_Ca ... r-1000.htm

I got mine from Bike Torque Racing (https://www.biketorqueracing.co.uk/) in Sept 2017 and paid near as damn it 800 sovs. Might be worth contacting them and see what they reckon - they're good guys.

And hot off the press... by filtering Bike Torque Racing's web site on a Cagiva Raptor we get the same F20C102K kit. See https://www.biketorqueracing.co.uk/buy/ ... 2k.htm#eq1

I can back up Andy's comment that Bike Torque Racing are good guys. My Matris stuff was delayed somewhat due to holiday closures at the factory but they came through in the end. I opted for their shock too and the result was worthwhile.

Thanks for all the replies, i have a jackup kit, so will start with this. I need to get some brakes first, so new pads and a bleed this weekend.
Roadsters are me!
Top

And if you're going to bleed the rear take the caliper off and raise it above the master cylinder. Chock the pads/pistons and have the nipple at the highest point.